Despite the setbacks for the cold, the tomatoes are flourishing. They are almost a foot and a half tall. Color looks good. I removed all the yellowing, cold-damaged lateral stems.  I would say I am on track for where I would normally be this time of year, which is a little surprising considering the long, drawn out cold spring we have been having. But lot’s of sun and a few hot days and the tomatoes have bounced back in fine fashion.

Yesterday I weeded all the beds and gave everything the first shot of Espoma Garden Fertilizer. Today, I went through the plants and pinched off the small flower buds that were starting to set. It won’t affect the quality or quantity of the harvest. Plants can’t expend energy in too many directions at once.  So by pinching off the flower buds, the plant will shift gears to green growth instead of fruit production. More flowers will come, but until I think they are ready, no flowers. This is gardener’s version of responsible parenting. I also went through and removed all of the suckers where lateral shoots come off the main stem.  They can have a tendency to retard growth if left unchecked. And if you can successfully root them, they are a ready made plant.

Today I also started tying up the plants as well. You have a lot of options with tomatoes. You can stake them, cage them, weave them o a wire, or just let them sprawl out. I choose to stake mine. It works better with square foot gardening. Over the years I have used a variety of tying options from jute twine to wire , electrical zip ties and kitchen twine. What I found last year was something that works better than all of that. Elastic. Just a plain old elastic band like the type you wold use for sewing. I bought a roll of 3/8 inch elastic at Walmart for just a few dollars and it goes a long way. I tie the stems loosely using a square know and leaving just a little room. As the stems thicken and move around, the elastic will stretch and flex with them without any damage. Especially when it gets windy.  It cuts and ties easily. The only downside is that you can’t compost it. So either you untie it and save it, or do what I do, cut it out with scissors at the end of the season and throw it away. 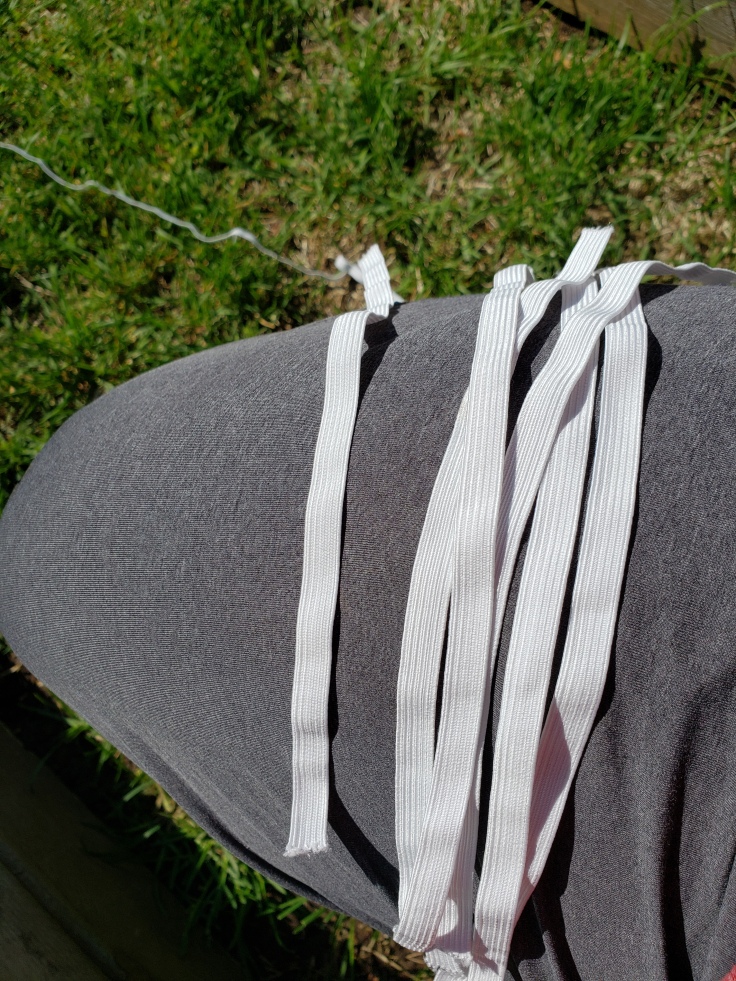 To Till or Not to Till

Finally, I would like to close out by bringing up a topic I have seen discussed a lot lately. Tilling or working the soil. The current and trendy view is that this shouldn’t be done because it damages the mycorrhizae which exist in your soil, and in damaging them you hurt the soil as a whole over the long term.

The mycorrhizae are those tiny little fungi that inhabit the soil and latch onto your plant roots in a complex symbiotic relationship. Plants can easily absorb water, but not so easily absorb most nutrients. The mycorrhizae need sugars that soil doesn’t provide. Thus a partnership is formed. The fungi latch to the plant roots and help the plant absorb those nutrients and the plants provide them with sugar. This is the complex interconnection of nature in action.

The along come the humans. We break up the soil to some extent in order to make soil easier to work, add in amendments or simply to till under a cover crop. It all amounts to the same thing. Some amount of damage is done to the beneficial fungi. But I believe that extent is a bit exaggerated by the “no till” permaculture crowd. There are several reasons why I think this is true, but mind you these are theories based on what science I do know.

If you remove the plants, roots and all at the end of the season, you are basically cutting off the fungi’s food supply anyway. But don’t worry, unless you are sterilizing your soil between seasons, those fungi have inoculated your soil with spores. Spores which hang for the next season waiting for another plant to bond with. This will be especially true if you’re a heavy user of compost or have a garden soil already rich in organic matter. Rich, well drained soil will help the mycorrhizal layer quickly re-establish itself.

The “no-till” viewpoint gives too much credit to these fungi for being able to overcome terrible soil. If you have that dreaded heavy clay, or soil so sandy it holds water about as effectively as a colander, then you need to amend it, most likely for several years in order to get it where you want it. The fungi that help the plants don’t really improve the soil. That’s not their function. So in this case the benefits of tilling or mixing in amendments, far outweighs the damage done. Your fungal layer will more quickly establish itself the better your soil gets.

There are several fungal inoculants you can buy to aid you in re-establishing the beneficial relationship. I can’t speak as to their effectiveness as I have never used them. I would suggest trying it out o a small scale and see how that does versus a non-inoculated section. Where I can see these inoculants being most helpful is if you are starting plants from seed in pots or trays and you are using sterilized soil. The sterilization process may have destroyed any mycorrhizal spores present. The seedlings will not need these fungi when they initially germinate. But as they quickly mature and develop roots  here it will make an impact with faster nutrient uptake. In theory this could mean you enter warmer weather with bigger, healthier transplants who already have an established root/fungus relationship to bring to the garden with them. Hmmmmm. This sounds like something to experiment with.

That’s all for now. The warm weather is upon us. So get out there and enjoy it. A bad day out in the lush green beats a good day inside anytime.